Maybe let’s call it a “beta”. Still fine tuning the controls. CPU runs somewhere between 50%-70% dependent on grain speed and grain size. Please let me know if there are any issues. Open to suggestions as well.

Controls:
Dry - controls the dry input level
Wet - controls the wet granular level
Feed - controls the amount of the dry signal that is fed to the recording buffer
Sow - trigger input that “sows” the grains
Freeze - gate toggle that stops the recording buffer from recording
Reverse - gate toggle that reverses grain/sample playback
Seed - grain density
Pitch - grain pitch
Size - grain size
Position - starting point of the granular playhead
Shape - squash control on the grain unit
Diffuse - adds a diffusion effect to the recording buffer
Pan - adds random panning every time a grain is triggered. 5 is full L/R, 0 is MONO
Feedback - feeds the grains back into themselves
Cut - DJ-style hi-pass/lo-pass filtering. 0 to 5 is hi-pass, 0 to -5 is lo-pass
Refract - adds noise, filtering, and distortion to the grains

As a challenge, I set out to make a Clouds “clone” custom unit on the Orthogonal Devices ER-301. It’s not strictly or exactly a clone, but rather a Clouds-inspired custom unit that expands on the Manual Grains unit in the 301. It adds a few Clouds-inspired controls, as well as a few other twists. I ended up with 2 different versions for now (more on that later). It’s heavy on the CPU (65%-75%) and there were two features I played with swapping out. There are two main Clouds features missing - one is the reverb and the other is the texture control that shapes the envelopes of the grains.

This current version was built with and was only tested on firmware 0.2.18!! It may work with previous versions, as long as it has the highpass filter. I would recommend only using it on 0.2.18 for now. It’s only in stereo for now as well. The input is automatically set to IN1, but may be changed.

Shoutout to Lance Drake and Bryan Noll for helping me test this! And shoutout to Joshua Saddler for notes and ideas.

Wet/Dry - Sets the wet/dry mix between the input source and the granular unit
In Gain - Sets the amount of the input signal feeding into the recording buffer/granular unit
Freeze - Gate input, stops the recording buffer from recording
Trigger - Trigger input, triggers the grains
Reverse - Toggle input, reverses the grains
Density - Triggers the grains internally without the need for a trigger input
Position - Sets the start point for the grains
Size - Sets the size of the grains
Cut - Cutoff of the filters
Res - Resonance of the filters
Pass - “Spread” of the filters
V/Oct - Volt per octave pitch control of the grains
Warble - Adds a small amount of pitch warble to the grains. Has a chorus effect when you can still hear the dry signal
Spread - Stereo spread and panning amount of the grains
Mod - Adds internal random modulation to the Position and Size parameters that are synced to both the Trigger Input and the Density Input
Gain - Grain gain

There are two versions of Ultraviolet - one has a feedback control which feeds the grains back into manual grain unit. The other has a control called Refract that is a distortion/bit crushing unit. I’m including a custom unit with both controls, but it’s prone to pops after a while.

The recording buffer is set to one second, just like Clouds, but it can be changed pretty easily.

This link is obsolete 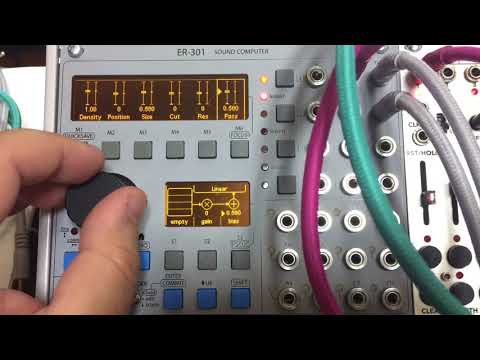 Works best on 0.3.05 48k firmware…wouldn’t recommend trying it on another firmware
Reduced CPU usage by nearly half. Still quite hefty at 40%, but them’s the breaks
No need to navigate into the unit to set the input anymore, it works like any other ER-301 default effect processing any input or unit placed before it
Removed “Refraction” parameter…to be made into it’s own custom unit soon
Removed “Warble”…better done another custom unit
Improved Wet/Dry control…2.5 is exactly even between dry and effect
Improved gain staging…there’s now an Input Gain control
Improved random stereo spread control
Improved feedback control
Improved internal modulation control
Added reverb

This link is obsolete

Excellent, not tried it yet, but have often thought this would be a good exercise - nice work actually doing it and thanks for sharing!!

killer work and thanks gain for sharing!

Whoa! This looks brilliant! Looking forward to trying it out. Thank you for sharing!

Back to say this is really awesome… just shared it in a few places!

Seconded! Just having play with it and this is really ace, @rbeny ! Thanks you for this, and to @Lance_Drake and Bryan for helping get it the kinks worked out.

More #ultraviolet clouds in the #er301.

Got a chance to play around with it this afternoon. Quite a beast of a custom unit! I take it that the name is a tribute to Tim Hecker? The refract/bit crusher portion of the unit is really nice especially - I’m thinking that I may want to make a custom unit of just that to use in other places. There is a lot here to explore and learn from.

Thank you for sharing!

Yep! Thanks to @Lance_Drake. He said it sounded like instant Harmony In Ultraviolet and I thought that would be a cool name.

I’m going to make a custom unit version of the refraction unit where you can control the parameters from the top level. With some more perks as well.

omg i just sold my clouds and this. is. perfect!!!

I finally had a chance to watch the video…

I’m listening to @rbeny`s other videos now and realizing that was nothing for him. You guys should check his other videos, there are some real gems in there!

Crazy stuff.
Thanks for sharing !