Hi everyone,
I was just daydreaming how cool it would be if the ER-301 (which already is one of the best modules ever, almost an understatement to call it just a module) had a small Output-Expander with selectable DC-Coupling.

I know for audio purposes the AC-coupling is absolutely necessary to achieve the high quality the outputs on the 301 itself have but thinking about using it to loop CVs or trigger other modules with internally generated compositional structures (e.g. events in a drum loop, granular synth etc.)
I have seen Joes workaround but with that one you have to sacrifice one of the outputs at least…
Also when using the ER-301 as a sampler and at the same time as a processor for other stuff I find the 4 outputs a little limiting at some stage (which is not a bad thing and they really do make sense the way the UI is defined) but still, would be really cool if one could add more Outputs if needed to process sounds externally (e.g. nice analog filters etc.) if desired.

I don’t know if this is possible after all or if @odevices actually would even consider it but it would be super ace in my opinion.
Cheers

You got me curious, what’s Joes workaround regarding this matter?

I believe it’s using a rectifier and a lowpass filter to convert a PWM squarewave to a CV, where the Pulsewidth is proportional to the CV you want to generate.

If the ER-301 could act as a “leader” on an I2c bus (technically I think it can, the Olimex board can do a lot, but it’s not yet implemented in the code of the ER-301 and it is “only“ a follower at the moment), it could use the TXo modules as “CV out expanders”. I don’t think this is on the roadmap at the moment but who knows ? …

That would be really cool. Hopefully eventually the SDK will be developed enough that the community could develop low level utilities like that. 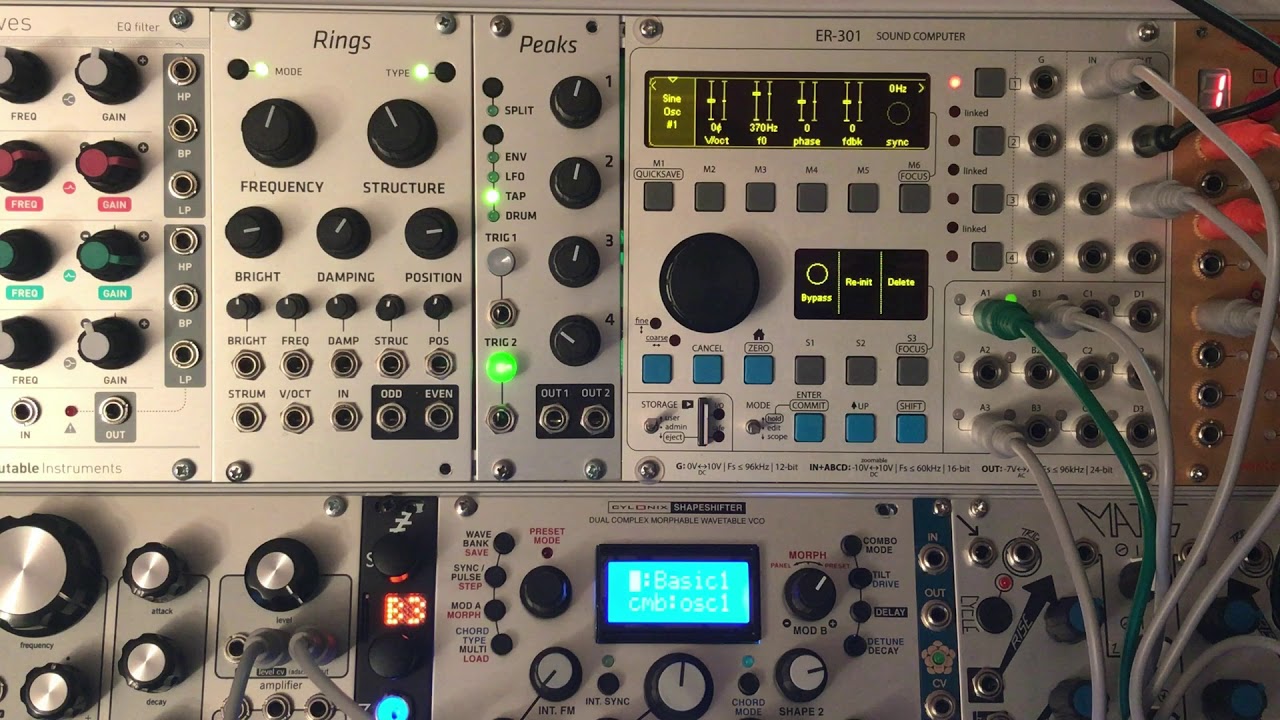 I believe it’s using a rectifier and a lowpass filter to convert a PWM squarewave to a CV, where the Pulsewidth is proportional to the CV you want to generate.

I must be mixing it up with a method I tried

One thing you could try if you happen to have a 4ms Spectral Multiband Resonator(SMR) is Joe’s trick with the envelope follower but use 6 sin oscillators with a VCA on each and tuning each sin oscillator to the corresponding frequency band on the SMR. Applying a CV to each VCA should allow you to get the CV out from corresponding envelope out on the SMR.

dont want to sound rude but…

could there one day be a DC coupled expander released for the 301? just curious as I could see myself creating some really useful CV modules inside of the 301 that I would love to use with my external gear.

CV output has long topped many people’s ER-301 wish list. But how to sneak a DC voltage past the AC-coupled outputs? The classic method: Attenuate some noise such that the amplitude is equivalent to your desired DC voltage, then extract that voltage using an envelope follower. And as I confirmed last night, such a method works just as well on the ER-301 as it does elsewhere. My completely unnecessary method: As above, but mult the resulting DC voltage back into the ER-301. Take that voltage …