Here’s the latest in my exploration to try to find something the ER-301 can’t do.

The 301 is capable of generating some very complex, custom envelopes. This video explores some techniques for getting started generating them.

Would love to hear if this video makes sense to you, and what ideas you have for applying complex envelopes. 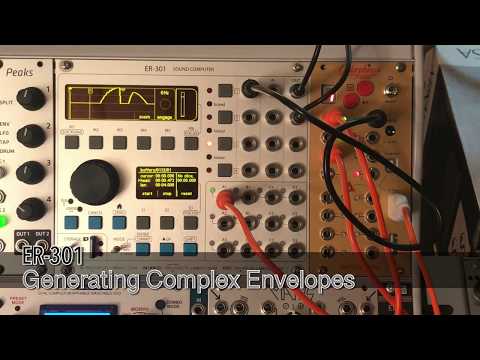 Here is a QuickSave of the patch from this video. To make it work out of the box, gate on G1 and V/O on A1.

Makes me want to combine this with your sequential switch patch

p.s. I really like how you’ve placed the Shuttle Control right next to the ER-301 - they are such a great combination!

I’m n ot sure why that didn’t occur to me. What a great idea!

Yeah - if it works how I think it will there’s loads of possibilities!

What about using one envelope to create a longer modulation, say over 2 seconds, and another inverted envelope to modulate over 1 second, and mix the signals; do you think you could get a dip in the attack portion of the first envelope?

Yep. I have tried something similar (the envelope wasn’t quite that long) but mixing an inverted signal, say from the ADSR or skewed sin definitely lets you subtract that “shape” away from another part of the envelope! Just a matter of positioning it at the right place in time (with the delay) and attenuating it to taste (with the mixer or a vca).

Yeah, that’s what I was getting at, you could apply the same feedback technique to the second envelope and probably recreate your whistle with just those two!

There’s definitely more than one way to skin the cat in many cases. One thing I’ve found kind of helpful in exploring this technique is to sketch out a rough idea of what I think the envelope should look like on a piece of paper. Then try to identify different geometries and what unit could make a shape like them.

You’re right though, there can definitely opportunities along the way to “refactor” and make it a simpler construct - things you maybe just didn’t see at first.

Thanks for doing the video, I am sure it will spark loads of ideas!

Thorough and crystal clear presentation as always @Joe! Thank you for creating this.

Some minor thoughts as I was watching:

Was the level parameter in the oscillators always voltage controllable? Somehow I missed that!

Mixing with offsets hadn’t even occurred to me but now that you say it, that makes good sense. Especially if the target of the envelope isn’t audio volume. It would give a 1:1 correlation with the parameter you’re modulating.

I didn’t mention the Fold unit, and had maybe envisioned it as the target of a complex envelope rather than part of the chain that generates it. But, yeah! My intention is still to do a video or three on the Fold unit. It’s one of the cleverest, most rewarding, and most under-discussed units in the 301, if a bit difficult to get your head around at first.

Thanks for the comments. One of the most rewarding parts for me about making these videos is when they become conversation starters and I learn some new things myself!

Use of fold is a genius idea!! Just brilliant - that has genuinely never occurred to me before - I learned an amazing thing today - thank you!!!

I attached a QuickSave of the patch created in the video for anyone who would like to mess with it.

This is amazing, I was looking at the Wave packets module and wondering how I could do something similar in 301, sure enough, you already had a solution.