This is another one of my “I don’t have a clue what I’m doing” threads, but since they usually turn into interesting discussions, and possibly a usable unit at the end here it goes.

That’s where I’m at so far. If anyone has ideas on this, shoot

I did it using Planar as a turntable-ish control, and the gate button on it to control a VCA, crab-scratch style. Video and short patch description here:

An etude in “scratching” with the Planar and ER-301. https://youtu.be/tPpRVLD-WF8 Patch notes: the Planar’s sense gate is the run signal for the sample (with an ADSR). The joystick is controling playback speed. (edit: worth noting this modulation is bipolar, translating to forward and reverse playback up to 2x speed.) The gate button is turning on a 301 internal VCA (also with an ADSR for de-clicking). The drum sounds are also out of 301, being sequenced by trigger outs from DrumDokta. Th…

Happy to answer questions if that’s not clear enough, though it’s been a hot minute.

The Varispeed Player will give better quality results. Have you tried putting your scratch CV through a Fixed HPF (*) and then into the speed control (with bias set to zero, gain set to one)? Make sure slice polarity is symmetric. Expect some slippage though.

Well this was just too easy. But so cool!!! I made this quick patch (literally 3 minutes) based on the tips and examples by @odevices and @jj.kidder, using the motion sensor by @Joe to open and close the VCA for the background loop. Then Squarp Pyramid touch pad CV to the “speed” parameter of a Variable Speed sample player with gain set to 4 in order to have a -2 +2 range of speeds depending on the incoming CV. Easy peasy. If I would want the sample to pick up speed 1 again after scratching I think I will use another motion sensor to make it happen. VERY HAPPY, ER-301 just ROCKS every single time.

I’m looping a drum pattern from the Analog Rytm into the modular, and the sample I’m scratching is an interview with child actors from “les 400 coups” by Truffaut, French brats talking back and forth.

(I filmed this with my phone for reference, sorry for crappy video and audio reflections, it reminds me that I need acoustic treatment in this room.) 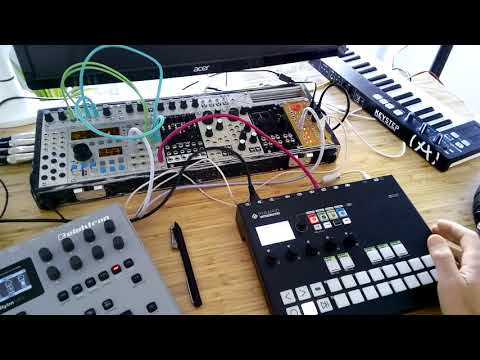 impressive proof of concept!
i don’t mind the crappy sound as long as i can hope for trying out
your preset in my own high fidelity bubble (i.e. the hope you’ll
share your findings when you’re done

This is a Two band stereo preset that has one band reserved for an audio loop or external audio coming in (or any internally or externally generated audio for that matter), and one band for scratching action. 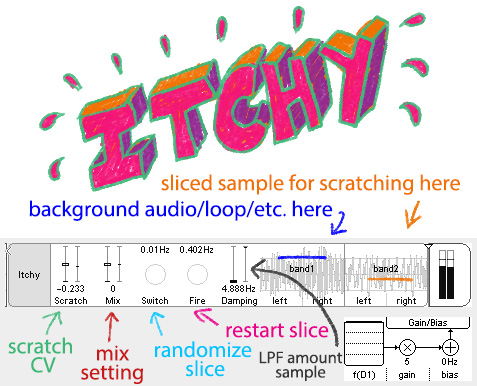 To get started, put your incoming audio in Band 1, one level down in the Mixer called Input, and place a sample with some nice, scratchable slices in the Scratch Sample Player in Band 2. Connect fast, gestural CV to both the Scratch and Damping parameter and start jamming. I’m using -5V to +5V CV from Shuttle Control and gain values are optimized for these voltages. For the Scratch parameter 0V is zero sample playback speed, +5V is double speed forward and -5V is double speed playing backwards. Adding the filter control Damping to it makes for a lot of variation even with one slice looping.

About the Mix parameter:

This is another little demo using the same audio elements like the last one but this time recording sound directly in the camera and using the preset rather than the “mockup”, so with added LPF control and everything in one place. In this version the Mix parameter is not yet implemented so the external audio is just ducked with a certain fixed amount while scratching (as if the Mix parameter would have been at -0.3 for example.) 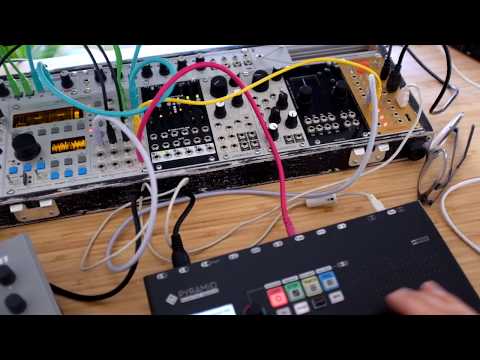