Strike is a collection of DSP units based around the LPG I released previously.

Since these are all written in the DSP layer, CPU usage is very low ~1-2.5%

A lowpass gate using the envelope from arc and a 12dB/oct biquad filter.

Also includes EOF/EOR gate outputs from the rise/fall controls as well as the envelope out from the height control.

An AD envelope with loop toggle and bend control.

A multi-mode biquad cascade filter with options for lowpass, bandpass, and highpass at either 12dB/oct, 24dB/oct, or 36dB/oct. Modeled after the equations outlined here by Robert Bristow-Johnson.

Output is tanh limited to give distortion at higher gain levels. This is particularly useful when pinging the filter at high resonance.

A state variable filter that mixes between lowpass, bandpass, and highpass. Modeled after the algorithm designed by Andrew Simper outlined here.

Output is tanh limited to give distortion at higher gain levels. This is particularly useful when pinging the filter at high resonance.

A “fin” wave oscillator, so called because the wave resembles a shark fin.

Essentially this is just a different configuration of arc as an oscillator.

A formant oscillator based on the Mangrove module by Whimsical Raps.

Limits the incoming signal with a tanh function.

A stereo peak compressor with sidechain and optional auto makeup gain. Also includes outputs for gain reduction and a gate when the compressor is active.

A lowpass gate using a slew limiter envelope and a 6dB/oct filter.

Also includes the slew output from the height control.

Pinging Sieve with a pulse wave and sequencing with Turing from lojik: 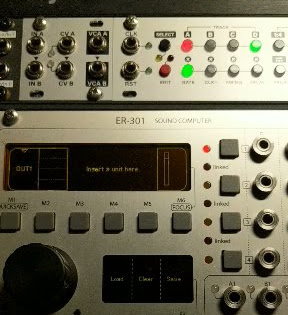 Looping Strike over a pulse wave and using the EOF out to hard sync the oscillator: 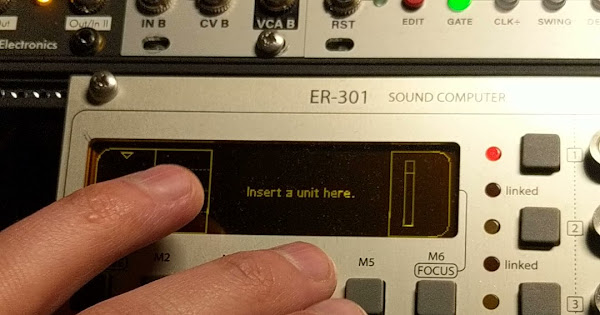 Ok last one I promise: looping Strike over a vari-speed player and using the EOF to re-trigger the sample! This technique is actually quite a lot of fun when changing the slice around. 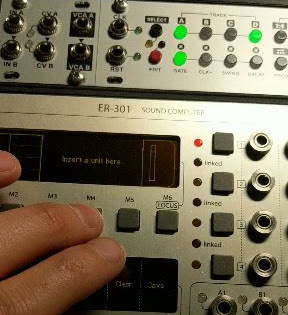 It’s on the hub https://er301-hub.netlify.app/projects/strike Thanks for these @tomf !

Thanks for sharing this! Strike and the Videos! Fantastic Work! Congrats!

Remade your first demo last night. Was a lot of fun. Thanks!

Nice! Always good to hear that it’s working somewhere else

Just fabulous- I’m so happy with the direction of the 301!
Fabulous work!

This is amazing. Had a little play with the Arc Unit and it’s perfect for my purposes. I love that the bend doesn’t change the length and that it has a built in height control. Thanks for all the hard work! Looking forward to trying the rest.

A question about the Tanh unit. Docs say “Limits the incoming signal with a tanh function.” I don’t know what a tanh function is so I’m wondering, is there a way to explain it differently? It seems to me that part of the usefulness of this unit is the gain control, so it’s more than a signal limiter right?

Basically it takes an input and maps the output to a hyperbolic tangent.

your input would be on the x axis of that graph and the output is height of the curve at that point. Basically it clips the input, but in a soft way. With the right settings this can turn a triangle wave into a sine wave. you can use it for limiting, distortion, waveshaping, etc. It is essentially just soft clipping.

Thanks for the explanation! This would be great to add to the docs, image included.

btw some of the new images aren’t showing up, needs a cache refresh maybe?

that didn’t work though, weird…

My guess is because the src references a png but the img is gif. I’d fix myself right now but am on phone.

Happy to report it’s all finished, I’ll be releasing Formant along with another unit as soon as I can get the docs together. The other unit I made is another application of this soft-syncing idea that’s so key to how mangrove works. When you sync, the wave just reverses direction so there’s no click. Applying this to both the rise and fall stage on an oscillator turns out to be extremely useful, especially when using it as an LFO. The syncing action prevents sharp jumps and can add a pleasant …

A formant oscillator based on the Mangrove module by Whimsical Raps.

A triangle (atan) oscillator with soft sync. Makes for a great LFO when synced to an envelope.