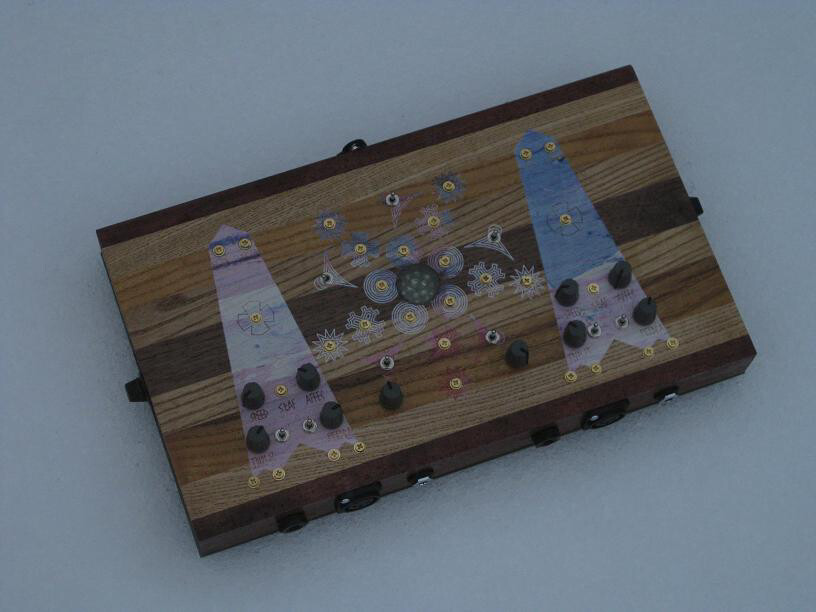 peter blasser’s quantussy from the ciat lonbarde cocoquantus, brought to the er-301. the ‘tritussy’ custom unit is a three petaled flower, each petal containing a triangle wave oscillator that can be cross connected to the other petals in different ways - from very slow lfo speeds to high audio rates… designed to give many options for spiraling, unpredictable, but somewhat repeating, fractal like patterns.

the front panel consists of -

there are 3 versions (mono only) -

firmware v 0.4.27 or later, requires accents. everything looks good in v 0.6.02 as well but feel free to ping me if somethings not working. to get started, turn up the vco 1 panel control and turn up the chaos knob. vcos are triangles and castles are s&h unless the blue leds are on. the lite and min versions are great as audio/modulation sources for @scttcmpbll’s ‘trash echo’ custom unit!

would love some feedback! (im new to this and there’s probably plenty of room for improvements). i made this to better understand the coco as well as the custom unit architecture of the 301. and i hope this is interesting to others looking to explore the amazing world of ciat lonbarde

Whoa thanks! I never played with any ciat lonbarde instrument but they have fascinated me for forever. Hope to get a feel for them with these units. Those modulation shapes look great!!

there’s so much play and joy to be found in pb’s instruments, whether you understand them on a deep level or have no idea what the hells going on. i really like that they steer towards more chaotic and darker sounds as well. here’s a great video of some quantussy mangling through both delays of the coco -

Wow! Thanks! I will try later😄

to get started, turn up the vco 1 panel control and turn up the chaos knob. vcos are triangles and castles are s&h unless the blue leds are on.

tried the “max” unit so far. already a sea of gorgeous and very useful sounds. i have not had a chance to play with a physical quantussy (i own and love only the plumbutter 2 and a shbobo shnth) but from what i understand from videos, you nailed it! congrats and thanks! will try the “smaller” units as mod sources.

glad you like it. and thanks for beta testing

just missing the nice smell of the wood and alligator clips

I tried the max version today, briefly, and I had a hard time keeping it from clipping, but apart from that it’s a wonderfully mysterious and unpredictable unit! I’m curious to see if I can get some understanding just by noodling around…

hmmm maybe i should have attenuated the sliders a bit. try keeping the sum of the vcos/castles under 1 and it should be ok! (could also go into - edit controls for the front panel and clamp the values to 0-1 instead of 0-5 to lower the chance of clipping)

also messing with some coco techniques like preset voltages into the blue fm ins to tune to melodies, like a chaotic troika box. castles though a quantizer driving external vcos/vs samples is always a good time too

Oh by the way, if you load the “max” unit in a stereo chain, the machine crashes, probably because of a close to double load on the CPU? I tried it three times before I figured out what was happening.

the lite version might run on a stereo chain

would be nice for some CL stereo goodness. appreciate you messing around with it though

was thinking of (at the cost of a few cpu%) setting up the 3 vcos in three mono mixers in the subchain of the blue/yellow toggles. muting/unmuting them would feel more like banana patching/stacking instead of diving into the local routings every time.

Will have to give this a try. Why didn’t I order a Coco before Peter jumped over the pond. I did get a Plumbutter last year and its a crazy unpredictable instrument.

But with this and my 301, a couple of 8 bit delays feeding off the buffer will get much of the way to a Coco, but without the tactile banana fun. I’ll check it out and report back. Thanks!

nice! what it lacks in bananas, it makes up for with flexibility - variable waveshaping of the triangles, quantization, huge range of precise frequency scaling. plumbutter into er-301 is

so can this combined with a looper/delay get close to coco2?

I had actually ordered a Coco from Patch Point in Berlin, but they have removed the petal carvings in the latest batch which I think ruins the aesthetic and playability (which banana belongs to which oscillator now?). And reduces its resale value IMO. So I canceled my order.

I had thought of using it hands on, replicating it in the ER-301, and then possibly selling it. On the surface it just seems like 5 cross modded oscillators, a pair of loopers/delays, and various inputs (dual stereo line, mic, piezo). But the sum seems greater than the parts.

I love Hainbachs videos, but they are more advertisements for having fun with expensive (or cheap stuff that rises in price after his videos!) gear than real tutorials. And PB’s manuals are more musings than guides.

This is the best tutorial I’ve found - detailed and straightforward. I live in a fairly remote area, and haven’t had a chance to play one yet, so this helps in understanding this quirky instrument. 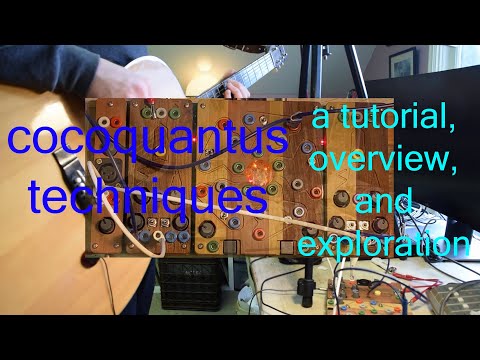 so can this combined with a looper/delay get close to coco2?

i think so. i’ve owed a coco a few times and when i go through my coco recordings, i have a hard time telling them apart from my norns otis recordings for that character. the trash tape unit is a fun alt take without the bitcrushing

one thing i didn’t implement in the tritussy was how much each vco drifts in the quantussy, which you could replicate with a slow-ish fluctuating random voltage. the drifting is a very cool/eerie sound when you send a sequence cv into the fm blue jack.

otis is lovely and addictive