Well at least we know when the release date is now

And what’s been going on in O|D HQ!

Would love to have that calendar one day, minus the code bit.

Yesterday was already tomorrow and still it appears the man continues the pattern of goofing off!

EVERYONE celebrate this glorious day where the inspiring man behind the curtain pulls the lever to show what a V0.4.0 looks like after a productive day of intense coding following an extended bout of goofing off. By the way, does his 11:00 release time pertain to 11:00 p.m. Tokyo, 11:00 a.m. New York, or maybe even 11:00 p.m. Pacific time?

It occurred to me that Brian could get to version 2.0 in a couple of weeks (after a year of goof off).

I have an issue with the Track Recorder not saving its state on quicksaves. The save preset functionality also does not work…! Basically its resetting to a blank state or remembering one or two channels on loading. Im running my CPU on 60-70% and on v0.3.25

I’m having trouble replicating your problem. Can you give me more details, like the number and type of tracks, what inputs (external or globals)?

Is it a known issue that in 0.3.25 when you save a preset that’s only capital letters, it makes the extension .LUA and can’t open it saying “LUA is not a valid extension”? Sorry, I’m in the middle of making a live set and didn’t have time to go through the posts to see if it’s already known.

I think two people have reported this but so far I have not been able to reproduce it or figure out why it happens.

FYI: Going forward from v0.4, *.lua will no longer be used as the extension for presets. So I’m pretty sure it goes away there. I’ve also made the check agnostic towards the case of the extension.

So, I dunno if you feel like there’s something useful in repro steps for this, but this is how I managed to replicate with 100% rate:

Here’s a pic of the folder where the files are saved to (in all its gritty detail). 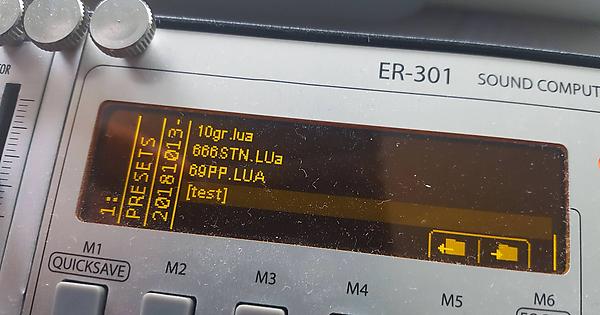 I think there’s something there where you notice that the 3rd letter of the extension is lower case, but the previous two are upper case. Tried it out and file named 666SANTA is saved as .lua and is openable very nicely indeed with firmware 0.3.25.

There must be something else that is causing it because when I try your procedure and others, I still do not get the extension in capital letters (ever).

Really odd. I can try with another card that’s not formatted with the ER-301, but I get consistently this issue with 0.3.25 on the card that I’m using.

Could you do me a favor and backup all your files to your computer and then reformat your card with the ER-301 and then retest with your procedure?

Then after that, bring the card back over to your Mac, create a folder and then retry your procedure but this time saving the new preset in the folder you created on your Mac.